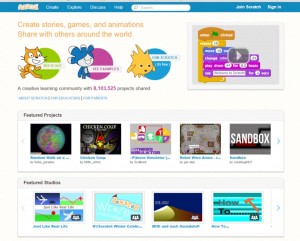 “At the center of each session is Scratch, a sort of gateway activity into coding, developed by the Massachusetts Institute of Technology. Its approach offers users a simple, block and symbol-based “language” that encourages users to consider logic, order, timing and keyed in specifics to make things happen – from a dancing cat to a full-on game.”

For more information on coding classes check with your local library or the Delaware Libraries events calendar.

We Geek the Delaware Dream is a statewide initiative to help citizens realize their dreams for the future and position public libraries as change agents. Visual maps are specific to the community conversations that took place at 6 public libraries.

Recently on the IMLS facebook, Delaware Libraries, Laurel’s Visual Map was featured and also tweeted. Check it out! 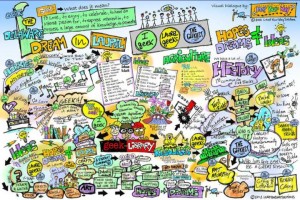 Written on: December 11th, 2014 by: Sarena Deglin in Archives

Library staff from across the state of Delaware are invited to apply to participate in ILEAD USA Delaware 2015. The Division of Libraries has been promoting this continuing education library immersion program over the past several months, encouraging library staffers whose positions may range from part-time pages to full-time librarians to identify a community need that can be addressed through an innovative use of technology. That is the core of ILEAD – a program that teaches library staff to work with each other using participatory and emerging technologies to solve a community need.

ILEAD, a clever acronym for Innovative Librarians Explore, Apply, and Discover, was initiated by the Illinois State Library (ISL) and will be funded in 2015 by an Institute of Museum and Library Services (IMLS) Laura Bush grant through the ISL and by the Delaware Division of Libraries.

Last year my colleague and I traveled three times to Springfield, Illinois, to participate in the fourth cohort of ILEAD as Apprentices. Along with ten* other states, we observed 25 Illinois library staffers as they progressed on their team projects, during the time span of March 2014 through October 2014. We watched the teams develop their leadership and team building skills as they learned new technologies to fulfill their project goals and better serve their communities.

By the end of the final session in October, these exceptional staffers were roaring to return to their libraries, armed with their ILEAD experience, claiming “[ILEAD] will challenge you. It will reaffirm your belief in what you’re doing. It’ll make you happy … Just join.” A.Y. from the I GED U team, 2014

Engaging Ones – developed a geo-location capable software application to connect teens with librarians and library programs near their current location. Resulted in IMLS Sparks! Ignition grant.

Grow Digital – a centralized site for people struggling with digital literacy where they can acquire the digital skills needed to function well in today’s society.

Robot Test Kitchen – reviews of robotic tools for use in a public library setting.

The Division of Libraries is bringing this extraordinary program to Delaware in 2015. We are in search of innovative library staff, mentors and instructors.

You can find additional information on ILEAD USA Delaware 2015 at guides.lib.de.us/ILEADDelaware2015

*Colorado, Illinois, Maine, New York, North Dakota, Ohio, Pennsylvania, South Carolina, Utah, Wisconsin (Other states participated as Apprentices and will not be replicating the program in 2015)

Language Comes Alive at the Library

“The kids get a lot out of these kinds of programs. When they go home they’re speaking some of these words, they’re humming some of the tunes. And I think the kids learn to love coming to the library.”

Guide to the Ebola Virus

Written on: October 15th, 2014 by: patty.langley in Archives

Questions about Ebola? Am I in danger? Can I travel?

The Division of Libraries now has a LibGuide on the Ebola virus. This guide gives you news, research resources and authoritative information together in one finding aid. 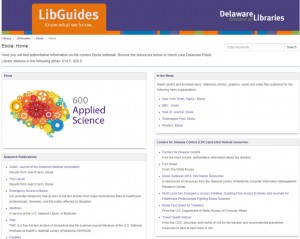 The Institute of Museum and Library Services (IMLS) recently interviewed State Librarian, Dr. Annie Norman, about how the needs of library users are changing and evolving. It’s an interesting topic and a worthwhile read. Thanks for the support IMLS! 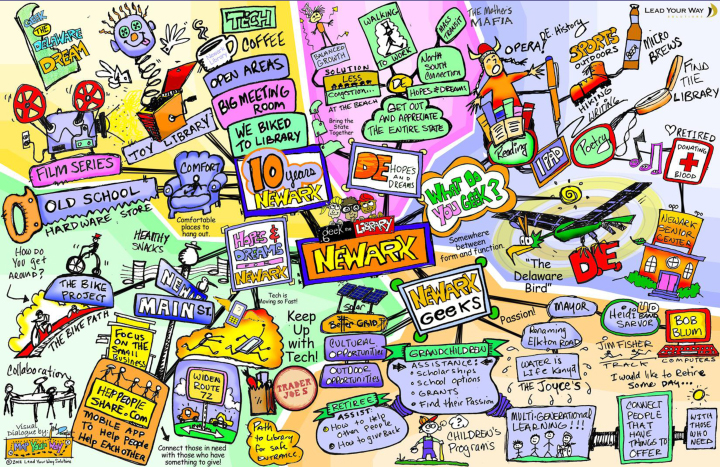 Written on: September 16th, 2014 by: gicblogs in Archives, Entrepreneurship 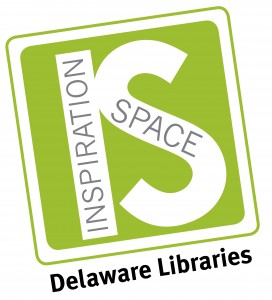 Fall is in the air – a time to harvest our bounty! At the Delaware Libraries Inspiration Space, we have been talking to Delawareans to find out how libraries can help to water, nurture and grow entrepreneurship in Delaware. We continue to urge people to share ideas with us via this blog.

Now we want to share some resources with you. Libraries in Delaware offer free programs for entrepreneurs, such as social media marketing and basic programs about how to start a business. There are several programs offered monthly at multiple libraries throughout the state.

Inspiration Space @ Delaware Libraries continues to be a large cornucopia for collecting ideas and this blog is one mechanism for us to share the ideas with you.

Join the discussion on this blog!

Written on: July 22nd, 2014 by: gicblogs in Archives, Entrepreneurship

Happy Summer fellow Delawareans – Please join the Delaware Division of Libraries in a conversation: How can we water, nurture and grow entrepreneurship in Delaware? There are already great resources and supports in some areas, but let’s take this to the best step (not the next step)! In Delaware, our very own Small Wonder, what can we do? There are some neat things happening and I am impressed by successful entrepreneurs who have volunteered their time to develop some start-up dream opportunities for others. We can do more, can’t we?

In the library system, we have conversations, so we are hoping that one way we can contribute to the nurturing of new and growing businesses is by being a LARGE SPONGE for ideas (that we will share in the Fall). We also love to share information and ideas.

Join the discussion on this blog or via social media:

In communities throughout Delaware, libraries are informational resource centers and gathering places, bringing people and organizations together. The Milton Library is helping to revitalize the downtown area, attracting large and diverse numbers of its neighbors with new programming and newly designed services.
Watch video on youtube