Where was the American Flag first flown in battle? Was it Cooch’s Bridge? 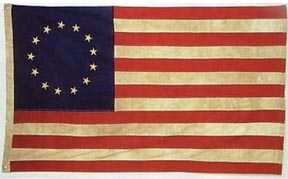 When and where the American Flag was first flown in battle has not been definitely determined by scholars.  On June 14, 1777, Congress made the following resolution: “The flag of the United States shall be thirteen stripes, alternate red and white, with a union of thirteen stars of white on a blue field. . .” Official announcement of the new flag was not made until Sept. 3, 1777. 1  It was certainly flown during the Mexican War (1846-1848) and the American Civil War (1861-1865).

Legend has it that Betsy Ross’ famous flag was first flown in battle during the Revolutionary War at the Battle of Cooch’s Bridge in 1777. (explorethearcive.com)

This legend appears to have its beginning during the Colonial Revival period. In 1901, the first monument erected at the battlefield stated the flag was present during the engagement.  However, the monument was modified in 1932 to be less definitive.

Nevertheless, the custom and tradition that the flag flew in battle was codified in The Battle of Cooch’s Bridge by Edward W. Cooch, published in 1940. Cooch stated, “(1) That circumstantial evidence indicated that the first use of the Stars and Stripes was a Cooch’s Bridge.  Although this has never definitely been proved, it has likewise never been disproved.  (2) That all evidence in support of Brandywine may be used in support of Cooch’s Bridge” (Cooch page 60).

Cooch supported his argument that the flag was at Cooch’s Bridge by assuming  that the flag was present eight days later at the Battle of Brandywine (September 11, 1777), a claim that has since been refuted by scholars.

As historians and flag scholars continued to research the Battle of Cooch’s Bridge, they found it unlikely the flag was flown there.

According to archeologist and historian Wade Catts, “The American formation fought as an ad hoc light infantry corps composed of picked men and volunteers from throughout the army and only existed for a month.  The whole purpose of the infantry was stealth and secrecy so it is highly unlikely they would have carried a flag into battle.”

Charles Fithian, Curator of Archeology for the Delaware Division of Historical and Cultural Affairs, agrees:  “The Stars and Stripes started as a Naval Flag so it is unlikely a light infantry unit that had just been formed would have had the flag.  And they tended not to carry flags which would announce their presence.”

Neither Mr. Catts, who is currently writing a book on the Battle of Cooch’s Bridge, nor Mr. Fithian have found historical evidence of the flag being flown at the Battle, nor of any British accounts that mention it.

Mr. Fithian explained there are no stars and stripes among the “Tarleton Flags,” the only surviving flags from the Continental Units.  Lt. Col. Banastre Tarleton captured the flags in two battles (1779 and 1780) and sent them back to England as trophies.  These flags stayed with the Tarleton family until their sale at auction in 2006.

During a surprise attack in 1779, Tarleton captured the battle flag of the Continental Army’s 2nd Light Dragoons, also known as Sheldon’s Horse, which saw combat at the Battle of the Brandywine.

The Battle of Cooch’s Bridge by Edward W. Cooch

Special thanks to Steve Newton from the Delaware Division of Libraries and Margaret Raubacher Dunham from the Delaware Public Archives for their research assistance and to Charles Fithian and Wade Catts for the historical analysis!