Written on: September 3rd, 2015 by: Sarena Deglin in Archives 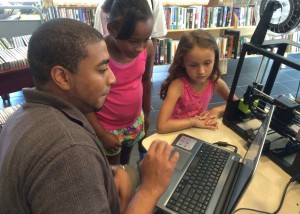 The 3D Printer Road Show came to a roaring conclusion the final week of August as we visited four libraries in New Castle County.

Early in June the Division of Libraries offered to visit each Delaware public library for a day to demonstrate a variety of 3D printers, introduce 3D modeling, and discuss the state of 3D printing in public libraries throughout the country. Fifteen libraries welcomed us into their space over the course of July and August.

Our primary goal was to introduce Delawareans to 3D printers, to give patrons throughout the state the opportunity to see in person what many have only read about or seen on television. DDL has permanently placed similar desktop 3D printers in a growing number of libraries.*

The 3D Printer Road Show was also intended to inspire Delawareans to think of what they could do even if they don’t have an actual 3D printer. An ideal response was from a patron at the Elsmere Library (which by the way has no 3D printer) who had designed her own 2D object on paper, fan art inspired by the popular video game series Final Fantasy. With our guidance, she scanned it on the library’s new flatbed scanner and converted it to the appropriate .STL (STereoLithography) file format for printing on the 3D printer we brought for the Road Show.

At the same library, staff are now eagerly learning TinkerCAD, an easy to learn and free 3D modeling software program anyone can access through the Internet. Their goal is to teach basic modeling to patrons, knowing if their desired end goal is to print they can send a print request to one of the other libraries in Delaware that does offer 3D printing services. 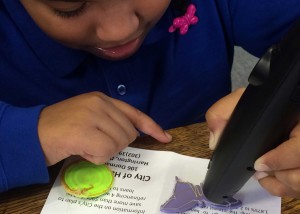 Embellishing a 3D printed butterfly with a 3Doodler.

Twin 11-year old girls at the Harrington Library (no 3D printer there, either) embellished a 3D printed butterfly using our 3Doodler. They thought of this idea completely on their own. To our surprise, these girls referred to SketchUp and Cura (two 3D modeling software available on every public library computer in Delaware) as “games” in which they designed their own houses – they had no idea this software interacted with 3D printers.

We encountered numerous other examples of ways the 3D Printer Road Show inspired innovative ideas, created opportunities for collaboration, and, I like to think, planted the seeds for future STEM professionals.

Learn more about 3D printing in the DDL LibGuide Unleash Inner Genius: 3D Printers and Modeling or ask at your local public library.

*There are soon to be 12 public libraries in Delaware that offer 3D printing services. Each is listed in the above-mentioned LibGuide.