Q: “I’d like to know if Zombie Ants are real, and what makes them Zombies?” 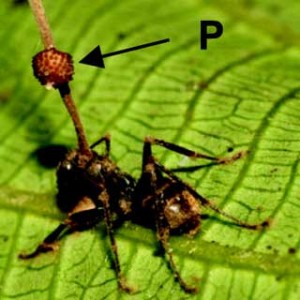 Thank you so much for your great question!   Like you, I had not heard of zombie ants until recently and wanted to find out more.

The fungus that causes certain types of ant to behave in ways that seem zombie-like is called Ophiocordyceps unilateralis.  Although it has been around for many millions of years, as reported on ScienceDaily, it was discovered and identified in tropical forests such in Africa, Brazil and Thailand fairly recently   An international research team led by scientist David Hughes of Penn State University, wrote the first paper in 2009 describing the effect of the fungus on an ant.  and to assure us this fungus targets a specific host species, the Camponotus leonardi ant (and does not affect humans).

As Dr. Hughes’ findings show, such as described in Scientific American and ScienceDaily, the fungus spores affect ants’ brains and behavior.  The ant who is infected will typically climb about halfway up the tropical canopy and bite on the underside of a leaf so hard as to be locked there with its mouth open.  This is an ideal location for the fungus to grow and mature, and it usually does by sprouting a stalk out of the ant’s head.  On this, the fungus creates more spores as to keep its own species alive.  “In other words,” reported Katherine Harmon of the Scientific American, “the fungus was transported via the zombie ant to its prime location.”  And in this way the fungus continues to thrive.

More information and images about the zombie ant can be seen on PennState’s ScienceCast (YouTube).

Most recently, Dr. Hughes and his team have reported that Ophiocordyceps unilateralis has its own enemy; another fungi.  According to Discover Magazine online, this fungi is not much help to the ant who is infected, however, since “it only infects the Ophiocordyceps after the ant has died.”  Another resource, the Encyclopedia of Life, reiterates the value of keeping this fungus in check.

New discoveries are made all the time and these help us understand ourselves better in ways that will improve health and well-being for all.  It is estimated that there are 8.7 million species on our planet, but that it is very difficult to have an accurate count and as stated on Life of Science in 2011, “all scientists agree that many more species remain to be discovered.”

Meanwhile, Dr. Hughes and his team’s research continues.  The National Geographic’s Daily News (May, 2012 by Christine Dell’Amore) quote the scientist’s thoughts:  “There are lots of these really cool interactions going on daily in the forest,” Hughes added, “and I think we should be studying them in more detail.”

If you would like more information about ants, the Delaware Libraries’ databases offer excellent encyclopedias and  journals for your use, free with a valid Delaware library card, such as Science News, Science Spin, and Scientific American, Earth Science, Science, and more!  If you need help finding the article, magazine or any information you need, please feel free to contact us anytime in person or online through Ask a Librarian Delaware. We love to learn and appreciate your questions!