Q: “How are meteors and asteroids tracked?”

Q:  “Hi!  I’m wondering how scientists track meteors like the one that hit Russia a few days ago.  Is there a public notification system?  If so, how reliable is it?” 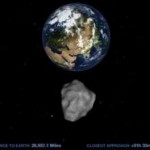 On Friday, February 15, 2013 we had two historical events:  the meteor that hit near Chelyabinsk, Russia and the fly-by of an asteroid.  This rare double occurrence has generated many questions about the likelihood of  future impacts and concerns for the devastation such can cause.  Let’s take a look at some of the facts about such an event.

Online dictionaries, such as Dictionary.com are terrific for quick definitions and meanings.  According to Dictonary.com, a meteor is a meteoroid that has hit the Earth’s atmosphere and disintegrated. If a meteor is big enough to hit the Earth, it is called a meteorite.    Asteroids can be viewed as ‘minor planets‘, most of which “…revolve about the sun in orbits lying mostly between those of Mars and Jupiter.”  Another explanation can be found through LiveScience’s 2/15/13 post by Marc Lallanilla, “What are an Asteroid, a Meteor, and a Meterorite?“

There are further details about types of asteroids and meteors which you can explore.  For example, the American Meteor Society offers indepth information on their site, such as for learning about “fireballs” (a type of meteor).

“…no human in the past 1000 years is known to have been killed by a meteorite or by the effects of one impacting. (There are ancient Chinese records of such deaths.) An individual’s chance of being killed by a meteorite is small, but the risk increases with the size of the impacting comet or asteroid, with the greatest risk associated with global catastrophes resulting from impacts of objects larger than 1 kilometer. NASA knows of no asteroid or comet currently on a collision course with Earth, so the probability of a major collision is quite small. In fact, as best as we can tell, no large object is likely to strike the Earth any time in the next several hundred years.

An article published by CNN (written by Meg Urry, Israel Munsen professor of physics and astronomy) on 2/16/13 states, “NASA scientists estimate that meteors as large as Friday’s might hit the Earth every decade or two…”  But most are unnoticed, she points out, since they usually land in water (which covers about two-thirds of our planet). 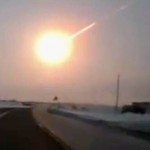 Estimates about the size and weight of the meteor vary a bit, but modern technologies (such as a cell phone camera) have provided ways for audio and visual recording and are assisting NASA and scientists everywhere with ways to refine early estimates.  It is now believed that the Russian meteor was larger than first thought.

There are tracking systems in place to watch for such flying objects coming our way, as noted by University of Texas astronomy professor Dr. Judit Gyorgyey Ries who remarked, “What I am excited about is that we knew it ahead of time. We knew it a year ahead of time that it’s going to happen, which shows that the search programs are really doing their job…”

One major resource you can freely refer to online is from NASA, called the Near-Earth Object Program.  Here you will find more about impact risks and search programs.

Although there are excellent tracking systems in place, improvements can always be made not only for tracking asteroids and objects  but also for deflecting any that are on collision courses with the Earth.  Besides the continued work by the world’s top astronomers and NASA, a non-profit organization called the “B612 Foundation” is also dedicated to the understanding and early detection of asteroids.  Among some of the educational information provided on their site, the  B612 Foundation offers an infographic on the Russian meteor. Their mission is to build a space telescope (called “Sentinel”) that will be launched in 2018.  As Dr. Ed Lu states while presenting at a TEDx Talk in Marin, California, “Simply put, its mission is to protect the Earth.”

The Delaware Libraries’ databases also provide excellent access to newspaper and magazine articles.  With your valid library card, you can quickly explore the deep web by topic, magazine/newspaper name, date, and more.

To learn more about asteroids and meteors, see the list of books and library materials you can check out.

And if you have more questions, please feel free to ask us anytime!  Librarians are online 24/7 through Ask a Librarian Delaware and we have many public libraries all around Delaware that you can use.  Thank you for asking your timely question!