Q: “What was the first Thanksgiving like?  Did they really have turkey and cranberry sauce?” 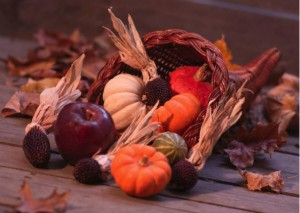 Interestingly enough, the first Thanksgiving was more of a political event than a family-centered one.  In fact, according to Robert Krulwich’s article (krulwich wonders: Robert Krulwich on Science on NPR, originally dated 2010, updated 2011), “About fifty Pilgrims came. Plus 90 Wampanoag Indians.” Further, it was likely no women were allowed to participate although they probably did most of the cooking.

Krulwich pulls his information from well-known historical writer, Andrew Beahrs, in his book “Twain’s Feast, Searching for America’s Lost Foods in the Footsteps of Samuel Clemens (Penguin Press, 2010).  This important meeting was more than a dinner.  The feast lasted three days!

Was there any turkey? Krulwich answers with:

“We don’t think so. The Wampanoag guests brought five deer with them, so venison was on the menu. The English brought fowl, ‘probably migrating waterfowl like ducks and geese, which were plentiful in autumn,’ says Beahrs. ‘Governor William Bradford does mention taking turkeys that year, but not in connection to the harvest celebration.'”

What about cranberry sauce? Again, not likely.  Beahrs states:

“If anyone at the gathering ate cranberries, it definitely wasn’t as a sweet sauce….Sweet cranberries need maple syrup, an ingredient that wasn’t plentiful till 60 years later. “The Wampanoag often ate the berries raw, or else in boiled or ash roasted corn cakes.”

The Thanksgiving holiday we celebrate has evolved over the years to what it is today.  It became a national holiday due to Abraham Lincoln in 1863, largely prompted by the diligence of writer and magazine editor, Sarah Josepha Hale.

No matter what you eat, how you celebrate and what form your feasting takes, may it be a time we all give thanks for you, our communities and supporters.  From all of us from your Delaware Libraries, have a wonderful Thanksgiving holiday!

if you have other questions, Delaware librarians are very happy to assist you anytime, in person or online through our Ask a Librarian Delaware 247 chat service.   We love helping our Delaware patrons, anytime!