Q: “Is it true that water swirls in the opposite direction below the equator?”

Q: “Is it true that water goes down a drain in the opposite direction when you cross the equator?” 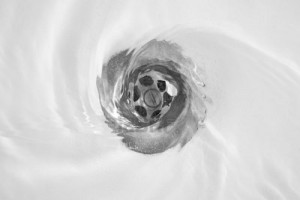 This question is a popular one!  To determine the truth behind this myth, we need  to consider some factors, but science sources agree that the reason for the swirling of a large body of water  or even how a hurricane moves is due to something called the Coreolis Effect.  The complication is that water pouring down a drain or toilet is too small of an amount to demonstrate the true Coreolis Effect as Matthew Feinstein states on the 1996 online document “Which way will my bathtub drain?: “There is a real effect, but it is far too small to be relevant when you pull the plug in your bathtub.”  It’s easy to influence the way the water drains simply by adding a little momentum, even if the angle of water coming into the basin or tub is slight.

However, if the body of water that is going down a hole is large enough, then yes, water will rotate in the opposite direction (clockwise) in the Southern Hemisphere. As Dave Van Domelen wrote in 1996, “The results were that after you carefully control all the variables (use a large wooden tub, control the temperature throughout the tub, have the drain be a tube extending up into the tub to avoid friction effects with the tub walls, start the water off spinning the “wrong” way, etc) and wait 18 hours for the water to settle down, water does indeed spiral down the sink opposite directions in the two hemispheres. But this effect is so subtle that it wouldn’t ever be seen in your bathroom sink.”

The movement of air also shows the Coreolis Effect; we have seen the huge spiral counterclockwise rotation of hurricanes.  The Little Shop of Physics from the Colorado State University’s site offers a good explanation and even an experiment you can replicate at the end of their article.

To see the Coreolis Effect in action (as an experiment) watch the brief movie of kids with a ball on a simple merry-go-round at the end of the ‘Real Life Example’ in the article called “The Coreolis Force” from the University of Illinois.  It is amazing to think that we see the ball moving in a straight line from above, but its path is actually curved!

Thank you for this great question!  Librarians often learn something new while helping our patrons and students find information, and this is no exception.  Please feel free to ask questions of your Delaware Libraries anytime, in person or online using our live, chat library service called Ask a Librarian Delaware.  We appreciate your service very much! We hope to see you in our libraries and online using our resources soon!