Q: “What is a federally compliant Delaware driver’s license (and ID)?”

Q: “My Delaware driver’s license is coming up for renewal.  What is the ‘federal ID’ talk I’m hearing about?  Is there something different I have to do?  When is the deadline?” 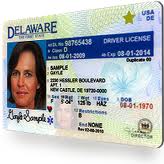 The Real ID act (which included the beginnings of a federally compliant driver’s license) was originally introduced during the Bush Administration in 2005 as an additional effort to fight terrorism.  Each State has its own driver’s license rules.  It’s not mandatory, but you can obtain a federally compliant ID or Driver’s License (since 2010) in Delaware. Just so you know, it is also called “Secure Driver’s Licenses by the Department of Homeland Security.

In fact, Delaware is one of the few states that have moved forward with a federally compliant ID.  The upgraded driver’s license (notice the ‘gold star’ in the upper right corner of the license in the image) is essentially to assist the government with travel inside the US (primarily, for domestic flights), and for entry to federal buildings/locations.  It does not replace a passport for international travel.

Since the bill was introduced in 2005, there have been growing concerns from all 50 states dues due to controversies surrounding a citizen’s privacy and fear of an increased exposure to identity theft with the storing of sensitive information, further immigration restrictions, the cost and staffing for implementing such a law, and concerns about Federally-mandated laws that have been individually State controlled.   In fact, the US Government implemented research to study the privacy impact of the Real ID.   However, more and more states are finding ways to address their home communities’ concerns while moving forward with some acceptable versions of a federally compliant license (such as Washington State’s “enhanced driver’s licenses” (see Q15 on the US Department of Homeland Security’s Secure Driver’s Licenses FAQ page).

It may be of interest for you to read the document from its source.   Here is a link to the original 2005 bill.

Our federal legislators have examined and challenged pieces of this proposal, with some States refusing to participate.  These have created postponements and pushed the enactment date so that a careful review can be made.  As the date of inception draws near (as of this writing, it is 2014 for those born after 1964 and 2017 for  those born before 1964), driver’s licenses in Delaware offer citizens a choice to obtain a Federally-compliant or non-compliant card.

According to the Delaware Department of Transportation,

“Delaware began issuing federally compliant DL/ID cards on July 1, 2010. In order to do so, we incorporated the following changes into our issuance process:

In order to obtain a federally compliant ID or Driver’s License, you will need to provide a little more identification than you have in the past.  The DE DMV has a list online.

There is also a handy “Document Guide” that walks customers through what is needed, too.  Just answer the questions and you end up with a tailored list.

Finally, good news is that the  federally compliant driver’s license (and ID) is the same price as a regular one.  You can also upgrade your existing card, if desired, for a $10 fee.

Thank you for asking, and please feel free to come back to your Delaware Library anytime with questions. We appreciate your service in person and online through our Ask a Librarian Delaware virtual reference service at: