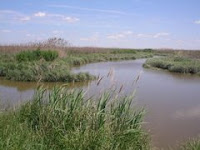 In a conversation last week, my coworker Patty reminded me that at least a couple of times a year, everyone should switch over to Route 9 for their commute between New Castle County and Dover. It takes a while longer, and is about 15 miles longer, but it’s still a beautiful change of scenery- and a nice change to see a landscape where human economic and social structures have integrated with rather than overwhelmed the natural landscape.

Route 9 is a designated Coastal Scenic Byway, recognized for its variety and beauty- there’s a good article about driving Rt. 9 here. A dirt road until the early part of the twentieth century, Rt. 9 was the main transportation and economic artery of the State until the development of Rt. 13, which began as a two-land highway in 1924 and ten years later became the first divided highway in the world, revolutionizing the State’s commercial life by allowing easy access to the northern markets for agricultural crops.

Mention of choosing between Rt. 1, Rt. 13, and Rt. 9 also presents an excuse to mention Google Books’ new service: full text embedded viewing of books scanned through their mass digitization program. Here’s a nice local example that you can read in full text without leaving this website: